If you are able to use an Ubuntu Edge phone with a Chromecast, it might be a game changer (then again, it might not). For one thing, you wouldn’t need any clunky peripherals like the Motorolla Atrix, which flopped. But if done well, I would love to have one. To have access to 128G of data without a network connection would be great. I could work on things while out and about. All I would need is a bluetooth mouse & keyboard (and there are some stowaway keyboards available).

Then, if you’re at a hotel or something, you could just plug in the Chromecast, set it to cast the whole desktop, and away you go. You can do presentations on any screen with an HDMI port, work on spreadsheets or play games, vpn in to your work PC, or ssh to a server you have out in the cloud.

You could do anything you can from home – anywhere. Not just the “apps” that are packaged for phones dumbed down so you can’t get real work done. You would have the full thing. It’s what I’ve been asking for since before the iPhone came out. Back then, I had owned several palm pilots and a couple Handspring Visors and even a Blackberry. What I really wanted was a Linux machine in my pocket that I could use anywhere and it still had all my working data on it.

Maybe my dreams will come true. Maybe I’ll have to build it myself.

My biggest problem with the Ubuntu Edge is they’re going for gold in the specs. I don’t really need it to be that powerful (or expensive). It would be a laptop replacement, but not a server replacement.

I went to the Dell EqualLogic User Group and Roadshow in Dallas yesterday afternoon and really enjoyed it. Three things really jumped out at me.

Note: I have not received anything from Dell, nor have they paid me in any way to write this. This is my own opinion. I just really like EqualLogic SANs. My favorite part is that the software is all inclusive. They don’t nickle and dime you for everything.

Note2: CIFS & NFS come on the FS series NAS, not the SAN. I thought that would be self explanatory, but maybe not. The NAS uses the SAN for storage, though. 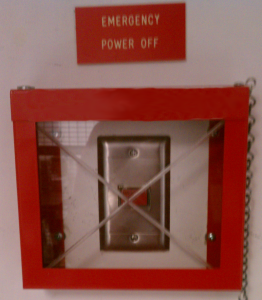 Until a few weeks, I hadn’t heard of a Molly Guard. But after my coworker accidentally rebooted our production NAS, I was tasked with creating a script that kept you from rebooting the wrong server. I wanted it to be much like the Dell Equal Logic PS Series’ [

Until a few weeks, I hadn’t heard of a Molly Guard. But after my coworker accidentally rebooted our production NAS, I was tasked with creating a script that kept you from rebooting the wrong server. I wanted it to be much like the Dell Equal Logic PS Series’]3 command that requires you to type “DeleteAllMyDataNow” (which is the best “are you sure?” message ever).

Legend has it that a mainframe programmer’s daughter Molly kept hitting the Big Red Button to power down the mainframe, so he created a Plexiglas cover as a “Molly-Guard” to keep little Molly from hitting the button again.

Well, the good folks over at Debian createda package called “molly-guard” for Debian systems… which is great, unless you don’t run Debian or a derivative thereof. So for Red Hat Enterprise Linux (RHEL) and its derivatives like CentOS or Scientific Linux, a very generous person modified it and released it for RHEL.

I created a github repo for it so that the code doesn’t disappear someday: https://github.com/tmhorne/molly-guard

One of my favorite things about the Dell Equal Logic SANs is that they make management both simple and direct. I can name a lot of other reasons too, but I digress.

Last year some time, we bought a new shelf for our SAN and we removed an older one to take to our Disaster Recovery site. While it was in the lab, I had the chance to reset it to factory defaults, which removes all configuration on the thing and you lose ALL your data. We had migrated off of the thing and removed it from the rack and it was in a lab environment, so there was no potential for impact.

Here is the beauty of the Equal Logic PS Series: It’s totally unambiguous as to what you’re doing.

To run the “reset” command, you mustn’t just type “yes” to confirm. You REALLY have to confirm it. They make you type DeleteAllMyDataNow. It’s awesome.

I had photos of it after I entered “DeleteAllMyDataNow”, but I can’t find them. I did have a memory card fail in my phone around that time, so it is probably gone forever.

If you’re building a new Linux Kickstart file and you accidentally typo your /boot partition for –size=10 instead of –size=100, it will fail spectacularly when /boot runs out of disk space.

Not that this is news to anybody, but it was really funny to me when I saw my mistake.