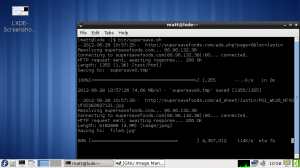 This past week, I installed Fedora 17’s LXDE spin. I LOVE IT.

I’ve been a Gnome user since 1.0 (see the screenshot under Red Hat 6.1 in the linked article). My favorite was probably 2.4 (2.6 messed up the file browser by default), which I compiled from source in Slackware. Everything worked how you would expect. At 2.4, it was leap years ahead of everybody else with the possible exception of Enlightenment, which you could use for the window manager anyway.

But then, about 10 years later Gnome 3.0 came out with Gnome Shell… and the peasants sobbed in the streets. The Gnome developers decided that they know better than their users and unilaterally changed the way things work. Don’t get me wrong, it looks pretty, but it’s now useless for real work.

I’ve tried KDE many times over the years. I can’t put my hand on it exactly, but I just can’t stand KDE.

I’ve enjoyed xfce as well, but it just wasn’t quite what I was looking for. There was a disconnect between the developers and myself. Certain things were just odd or out of place for my taste.

I’d probably love Enlightenment 17, but it’s difficult to find a distro with packages and I’m too lazy to compile from source.

On a whim, I decided to install Fedora 17 LXDE spin. It’s exactly what I’ve been looking for. Familiar Gnome looking goddness, but without the bloat. It’s quick. It’s a normal desktop, not Gnome Shell or Unity, so I can use it and get actual work done.

Admittedly, there are some rough edges. It’s a smaller, newer desktop environment, so they don’t have all the bells & whistles that some of the older ones do. But I’m okay with that because it doesn’t try to change my workflow like Gnome Shell does. Plus, it’s way faster than Gnome ever was.

I did download & use one of the Gnome 3.0 desktop backgrounds. It’s just so pretty.

I think I’m in love. 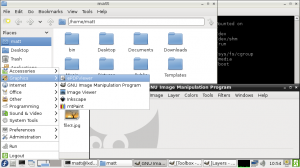